When looking for an Amsterdam hand poke tattoo artist you should definitely check out the work of Flo (@flo.maria.pokes) who’s subtle fine line Amsterdam styled designs clearly reflect her background as a designer/illustrator.

Before she became part of the tattoo community Flo was a designer for a fashion brand, but her interest shifted towards tattooing when Flo herself started getting heavily tattooed. She started out on her friends and gradually learned the art of hand poking.

Nowadays Flo is working at New Amsterdam Tattoo Studio and a favorite among those who want fine line tattoos and experience the art of hand poking, which many say is less painfull than a regular tattoo machine. 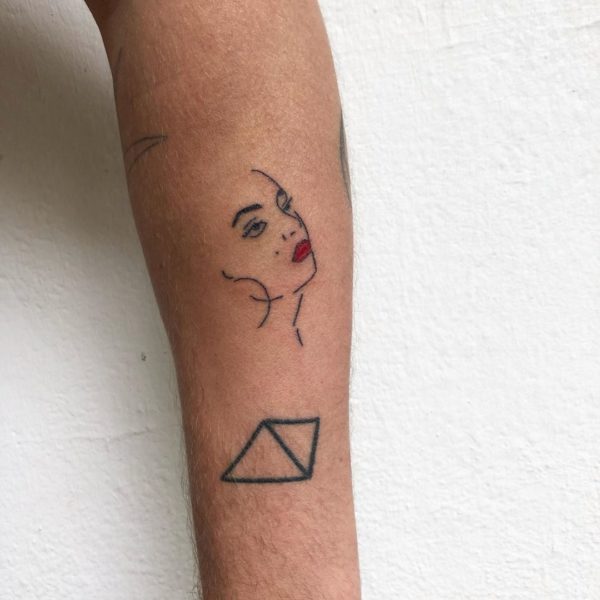 Hand poking (also known as stick & poke) is a method of tattooing which is basically the same as using a tattoo machine, but the needle is hand powered rather than electric.
Inking someone’s body by hand has been done for thousands of years before it became an electric process thus being the oldest form of tattooing.

Hand poke tattoos are very subtle in their look, and nearly all styles can be achieved with various techniques but large tattoos are usually not common because hand poking takes a bit longer opposed to machine based tattoos. Most people would agree that hand poked tattoos look more natural and organic.

It is tattooing in it’s most basic form of applying ink to the skin, very simple, and that’s often the appeal of getting a hand poke tattoo. The aggressive buzz of a tattoo machine is no longer to be heard and it generally doesn’t hurt as much as a machine either. This is because it is less invasive which allows the skin to heal faster.

So if you would like a true Amsterdam hand poke tattoo you can contact Flo via our contact form and book your appointment or acquire general info on hand poked tattoos.